In many remote communities, only subsurface groundwater is available for use. This water is often contaminated with salts, arsenic or even heavy metals such as uranium. Most purification processes involve high capital and operating costs and frequent maintenance. This is especially the case with state of the art membrane technologies such as reverse osmosis (RO) which is energy intensive and prone to scaling problems, and produce water that is deficient in key mineral elements that are important to crops. Additionally, the high energy requirement necessitates the availability of a reliable mains power supply, a feature that is often non-existent in remote locations. Furthermore, RO involves pure water being removed across a membrane from a solution at high pressure and therefore carries a large energy cost, and such membranes are also vulnerable to fouling, leading to a high maintenance cost.

Finally, mCDI can be operated using photovoltaic power since only relatively low potentials (< 1.5V) are necessary for salt and contaminant removal. The UNSW and CTET teams developed a prototype powered by photovoltaics that uses energy recovery technology patented by UNSW to reduce overall energy consumption.  A Digital Twin of the unit has also been constructed enabling remote monitoring and control of the unit using state-of-the-art VR/AR technologyThe CTET and UNSW teams are developing membrane capacitive deionization (mCDI) as a robust, energy efficient and cost-effective technology for desalination of water. Unlike the other techniques, mCDI removes salt ions from a mixture at low pressure. Furthermore, energy release during electrode regeneration can charge a neighboring cell working in the ion electrosorption step so almost half the energy used for purification can be recovered.

Professor Waite and his R&D team at UNSW have already installed a demonstration unit in north western China. The US$25,000 WAITRO Innovation Award will be used to support two students to help develop a second demonstration unit for treatment of brackish groundwaters in Dubbo, New South Wales, with one student contributing to data analysis and process optimization while the second student will be involved particularly in enhancing the VR/AR capability of the unit. The team is hoping to leverage the WAITRO Innovation Award to find additional partners throughout the Global Innovation Family with whom to grow a valuable business while solving critical problems of access to clean water in remote communities.

The team is led by Prof. T. David Waite, Chairman of CTET and Prof. John Fletcher, Head of Power and Energy Systems, School of Electrical Engineering and Telecommunications, UNSW Sydney. 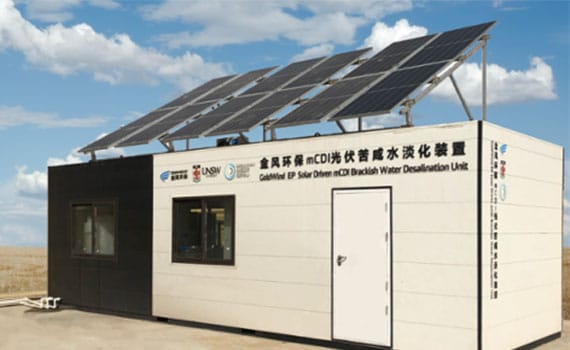